The Woman Who Cried Marital Abuse 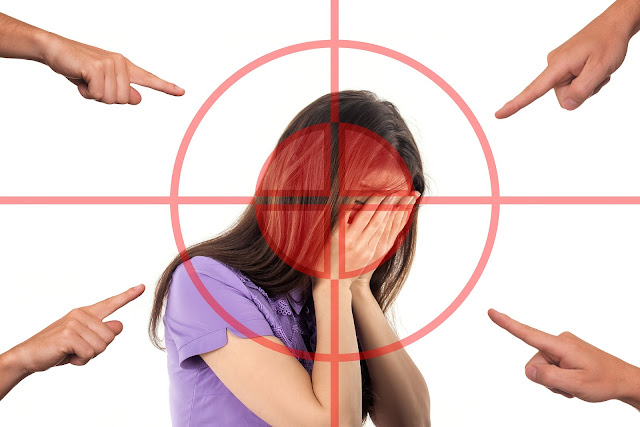 ‘She is a woman with loose morals. She tortured me. She has no respect for me.’ If you hear a man say these words how would you react?

Now what if I just change the perspective –

‘He is a big flirt. He tortured me. He hasn’t treated me like a wife.‘

Has your reaction changed?

These were the words that Hasin Jahan, wife of Indian cricket speedster Mohammed Shami uttered. And the world has declared her a liar. At least in the Aesop’s Fable ‘The boy who cried wolf’, the shepherd boy is given 3-4 chances before he is considered a liar.

Why is a woman who claims of having faced marital abuse labelled a liar right at the outset?

Nobody knew who Hasin Jahan was until she came forth regarding a domestic violence and adultery against Shami. (Read about the case details here.) On the other hand, her husband is an Indian cricketer and hence a celebrity of sorts. So there could be only one motive she could have had: to get publicity.

Celebrity men can do no wrong

And if we consider the reverse – does Shami just by virtue of his celebrity status be automatically absolved of any wrongdoing? Sure it requires great caliber and discipline to make it to the Indian Cricket Team. But how does that automatically mean that he is not flawed as a human? What has he done to deserve our undying loyalty? Why do we declare him innocent before the courts have?

We have seen in the past how our love for Hindi Film stars has coloured our opinions of them so much that we have forgiven them for the possession of drugs, physical abuse, murder…so on and so forth. In a recent case in the south, Malayalam actor Dileep was booked for the crime of masterminding the rape of a film actress, Bhavna. A lot of his influential male colleagues came in support of him initially, because you guessed it –‘We must support him during such a tough time in his life’. Not the woman who was raped…but the already powerful film star was given support. Of course, once Dileep got arrested, these influential people are nowhere to be seen.

Shami can’t be at fault, so the other side (who was quite aware of the opposition she would face and yet went public with her side of the story) must be attacked…and mind you without any proof. 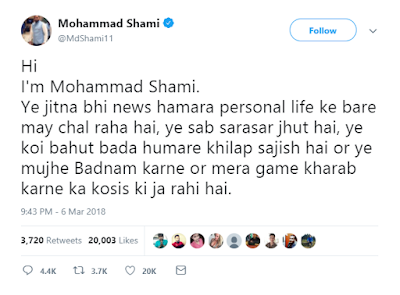 He makes some vague statements and shares no proof. But as you can see from above, over 20K people support and agree with Shami.

2) The general public lashed out at Hasin

On the Facebook page that Hasin posted the screenshots of Shami’s allegedly objectionable Whatsapp conversations, she faced direct outrage from people. She received a lot of comments from Indian men calling her attention-seeking or asking her to settle things with Shami. Sure, settle because marital abuse must be swept under the carpet.

3) Shami made new claims to brand Hasin as a liar

Shami sprung new claims out of the blue that he was not aware of his wife’s first marriage prior to marrying her. This obvious attempt to malign his wife's character, was refuted by Hasin’s lawyer. He said that these facts had not been hidden.

There was little praise and more criticism for BCCI’s decision for withholding the central contract that was to be given to Shami.

5) Support for Shami or ganging up against Hasin?

When Hasin insinuated (she never made any official statement to the effect) that Shami could be involved in match-fixing, the cricketing community stood up in favour of Shami.

Badruddin Siddiqui, Shami’s coach who claims to have last spoken to Shami during the South African tour said that Shami is shy person. Media reports quoted him saying:

“His wife's accusation is totally false. The couple should have sorted out the matter among themselves.”

“Shami is a brilliant hardworking cricketer. I agree that his personal relationship is in trouble currently but such kind of allegations by his wife is nasty and sickening until proven.”

“I refuse to believe the allegations that have been leveled by Shami’s wife. If she knew about match-fixing then why didn’t she report about it earlier? When the relationship was fine, why was she silent then? There is an investigation team. Let them do their work. If Shami has done something like this then it is unacceptable and disgraceful,”

In relation to the allegations made by Hasin Jahan, the words used are - 'totally false', 'sort out the matter', 'personal relationship is in trouble', 'nasty and sickening'.

Prior to the matter being adjudicated, it is a simple matter of 'He said, She said'.  But of course, what he said is true and what she said false!

BCCI gave Shami his contract under the pretext of absolving him of match-fixing charges forgetting that the contract was withheld for an entirely different reason. Today, Shami’s life is pretty much back to normal -he's representing the country and playing for the IPL. Does anyone care what happens to his 'personal' case?

Marital abuse has no place in our patriarchal world

Nobody came to support Hasin Jahan- the woman who cried marital abuse. She cried and cried. But the big bad world did not care. Because she was lying right from the beginning. Because there is no such thing as marital abuse- everyone knows a man can do whatever he wants in a marriage. A woman who complains about her husband and defames him in public is a woman of loose morals. A man’s reputation must be protected, a woman’s reputation…what is that? Her reputation is linked with her family and she has spoilt her family name. Let this be a lesson to all women. Let them think twice before complaining about their husband. They must know that they will fight a lone battle. Their cries will not be heard.

Sigh! Patriarchy, when will you learn?!