Are the 2 ‘Queens’ of our Entertainment Industry Feminist Icons?


Are all influential women automatically Feminists?

I have been wondering about this for a while.  Of course men can also be Feminists. But do we confuse power with Feminism when it comes to women? Let us try and figure this out by taking examples of two women who are at the top of their game: Ekta Kapoor – the undisputed Queen of TV and Kangana Ranut- Queen of the Hindi film industry (in more than one way).

I must confess that I love listening and/or reading interviews of powerful women of today. It gives me a lot of motivation to follow my own path. While Kangana Ranaut has been in the news very often owing to her outspokenness, it was a recent TED talk by Ekta Kapoor that made me realize that Ekta Kapoor also has had to break some barriers to reach the position she is in right now. She may be rebuked for her regressive serials and her intense beliefs in religious rituals, astrology and numerology (Did you know that even for the TED talk, Ekta had a condition based on her astrologer’s advice: she would speak for exactly five minutes and forty seconds, not a second more or one less?!), but no one can dispute the success she has had.

Is Ekta Kapoor a Feminist?

Read on to know... (Excerpts below are from her interview with Huffington Post)

Ekta said in the Huffington Post interview that “There was a time in films when only stories of men were told. The hero was a man, the villain was a man and the women only danced around.” Her successful TV shows – Hum Paanch, Kyunki Saas Bhi Kabhi Bahu Thi or Kahani Ghar Ghar Ki definitely depicted strong women who were central characters who enjoyed majority of the screen time. Was this because it is a fact that most TV viewers are women and her market research was on point? Sure. But she still gets points for Feminism.

“I said sex and sanskaar are two aspects of the same woman.”

Ekta has received a lot of flak for showing her women as ‘Sanskari’ in her TV shows. She argues that TV has a lot of restrictions. It is watched with the family which means the mother or the wife can’t watch everything with her children and husband. She said... 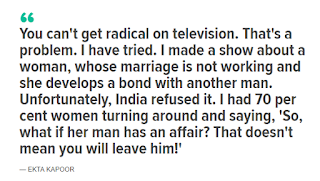 She may have a point here, but by pandering to audience, and what it likes she becomes a part of the problem.

Then she makes a ‘bold’ film like Lipstick Under My Burkha that talks about the sexual urges that women have. She says that ‘it makes me more determined in my resolve to make the film work to prove them wrong’. A film like that ought to have been made and kudos to her for making it. The negative points for her sanskari shows and positive point for dealing with a real issue in Lipstick cancel each other out.

Feminism along with Objectification

A. This is how Ekta defends her shows:

a) Ekta states that according to Boston Research Group, from 2001 to 2005, the TV shows are the real reason why women at home actually took on family decision-making, because Tulsi and Parvati (the protagonists from her TV shows Kyunki Saas Bhi Kbhi Bahu Thi & Kahani Ghar Ghar Ki) did it.

b) The issue of ‘marital rape’ was taken up in Kyunki when Tulsi kills her son for it.

Let's give Ekta gets positive points for incorporating these important issues in story plots .

B. This is how Ekta defends her Films:

In her films like Kya Kool Hai Hum and Great Grand Masti the women are highly objectified. This is how she defends it:

“If I think about it, Kya Kool Hai Hum was crass. That I will say. But being crass and being anti-feminist are two different things.” “I will make Kya Kool Hai Hum 4, 5 and more, films with as much as sex as possible because I have a problem with sexual crimes, not sex.”

From the above, it is clear that either Ekta doesn’t know the meaning of Objectification or she is desperately trying to defend her actions. From Wikipedia: Female sexual objectification by a male involves a woman being viewed primarily as an object of male sexual desire, rather than as a whole person. Since she is not even aware of the negative impact of such depiction in her movies, she gets negative points for Feminism.

Again the positive and negatives cancel each other out.

By Bollywood Hungama, CC BY 3.0, Link

Before you can say ‘nepotism’ let me remind you that Tusshar Kapoor (with the extra S and everything!) is not as successful as his sister. Unfortunate for Tusshar, but this speaks a lot about her family’s progressive attitude and her talent as well as skills. Becoming a TV mogul and making an identity for oneself with a father as famous as Jitendra is special. In her TED talk, she spoke about she had to deal with patriarchal mindsets. She said that media professionals saw the rejected pilots and asked him why he was investing in her ‘hobby’ of producing TV serials. She emphasized on the need to work after marriage because “When nothing else stays with you, your work does.” She leaves the audience with inspiring words that one must find the gold within themselves instead of their fathers buying gold for their daughter's future. The Queen of TV has made her mark on the big and small screen with over 90 TV show and 30 films, which in itself is no mean feat. She is now set to conquer the micro screen with her new offering ALT Balaji which will create content for the digital medium.

From the above, it is clear that while Ekta Kapoor’s story in itself is inspiring and breaks many stereotypes, her work may not entirely reflect it.

Is Kangana Ranaut a Feminist?

She speaks her mind. She is unapologetic. She is fearless. She is bold. These are the attributes associated with Kangana Ranaut. They are also what make her stand out for the rest of the actresses. I must admit, I am a Kangana fan- of the actress and the person she is. But is she a Feminist? Let us find out.

Says no to Fairness Creams

She does not endorse fairness creams The actress does not like the way such ads are presented, and thinks that such ads do hurt the confidence of darker people, especially women. Kangana also mentioned that her sister, too is a little dark, so endorsing a fairness cream would mean insulting her own sister and the rest of the community who aren't fair.

She did not hide, rather spoke up when an obsessive lover threw acid on her sister Rangoli. This is commendable. Rangoli's story gave so many women the inspiration to survive such horrendous acts. “We Don’t Glorify The Right Heroes”, she says. And that's so true.

Stands up for gender equality

She has gone on record to say something no Hindi Film actress has said ever- that she would rather not work with the Khan’s in the industry if it meant playing an unequal part. This is something most of the male actors will not go on record to say! The fact that she is so confident of her abilities to demand to be treated at par with the male superstars is inspirational. If more actresses took a stand like Kangana, it will improve the gender inequalityin our films. More screen time for women would mean more songs and we will get to hear more songs from our talented women playback singers!

Stands up for equal opportunities for all

Her open proclamation of the widely prevalent nepotism in the film industry had many people follow suit. Everyone knew it but no one had the guts to stick their neck out. When people who are not deserving, get preference solely because of their social influence, there are many others missing out on those opportunities. 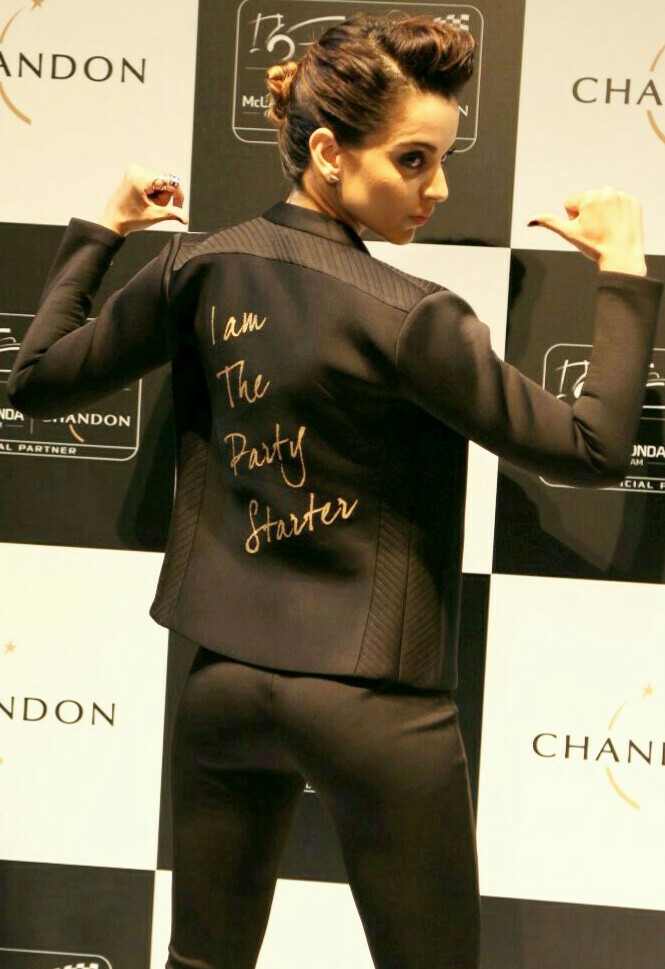 By Bollywood Hungama, CC BY 3.0, Link

There were many who attacked Kangana for washing her dirty linen in public when she spoke candidly about her past relationship mistakes. Singer, Sona Mohaptra wrote an open letter admonishing Kangana for her ‘publicity stunt’. And many would agree with her. I don’t think Sona said anything objectionable really. But as highlighted in this article, Sona has no right to ask Kangana to not express herself. The author explains how women are prohibited from expressing themselves historically. That is why we have very few autobiographies of women. If the story of a woman doesn’t fit in the mould of society, then it must not be told. Kangana broke this mould and how. Don’t girls have relationships? Don’t they make mistakes? Don’t they break their heart? Then why hide it? Why can only men live real lives while the women have to stay invisible? Kangana did not play the victim card-she always told her stories as though she had made peace with it all. She showed a lot of courage by opening up about an abusive relationship and also egged women to go to the police if they were in a similar situation.

Raises her voice against the objectification of women in movies

Kangana’s always played strong women characters – right from her earlier not-so popular films such as Gangster or Woh Lamhe to her recent films such as Tanu weds Manu, Queen or Simran. Film Kangana refuses to be a part of ‘Item Numbers’ because they objectify women. In a collaboration with AIB, a popular Indian comedy sketch group, Kangana Ranaut calls out the Hindi Film industry for its widespread sexism in a viral video. You can read the on-point lyrics of this parody item number– ‘The Bollywood Diva Song’ here.

From the above, it is quite clear the confident and talented actress is a spokesperson for Feminism. She is my role model, because I like outspoken people. Is she perfect? No. Has she had her foot in the mouth more than once? Yes. But all of us have flaws.

Both Ekta Kapoor and Kangana Ranaut are influential members of the Hindi Film Industry today – in fact Ekta maybe more powerful than Kangana. As members of the entertainment industry, both Ekta and Kangana have some core responsibilities- to entertain their audience while also furthering their careers. In my opinion Ekta took lesser chances than Kangana to support the cause of gender equality. Is it mandatory for everyone in the entertainment industry to utilize their powers for a greater good? Certainly. Is it possible? Yes. And yet very celebrities worth their salt will do it. According to me, everyone should believe in equal opportunities for all genders. And it is imperative that women who reach powerful positions, be more supportive of other women so that it becomes easier for the next generation to break the glass ceiling.

We, as consumers of various forms of entertainment also have a responsibility- to be more open to ideas that are new and progressive. If we continue to support and consume content that confirms with rigid ideas, that is what will be made. Also, what gets reflected on screen is usually what takes place in our society. Once the world we live in is more inclusive and less regressive, that’s what we will get to see in our stories as well.