A Message in a Bottle: Flash Fiction for World Environment Day 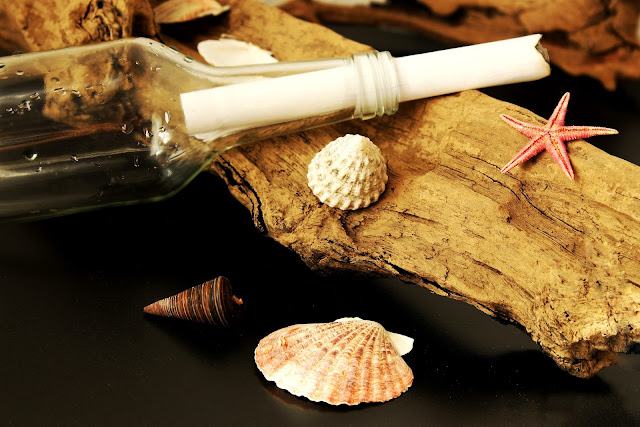 It was a bright warm day on the beach. The waves were gentle. There was hardly any breeze. As the waves receded, they left behind a bottle covered with seaweed all over. Jamie rushed over. The six-year-old was so excited to visit the beach. He vaguely remembered the last Sunday beach trip. It had been too long ago.

He dropped the sea-shells he had been laboriously collecting the last half an hour and bent down to pick up his newest treasure. He stopped when he heard his father shout ‘Jamie, wait!’ He looked up to see his father come running towards him with his hand raised and palm facing him. He hung his head in resignation! He couldn’t wait to become a grown-up! They had all the power! He was sure his father would lay hands on the bottle first under the pretext of checking it for safety. He will have to change this story when he relayed his adventure to his friends. He only wished his father would not do any rubbing. Everyone knew that Genies granted wishes to the person who freed them. Oh, how Jamie would love a good Genie!

Peter walked up and slowly (too slow!) picked up the bottle. He carefully removed the seaweed from the bottle. As he noticed the shape and colour, he couldn’t help but wonder…

Years back…he remembered he was at the same beach. He had been about a decade older than his son. Peter had spent the whole day on the beach – just him and the waves. It was the day Angela had left the town, the school and him – forever. All the pent-up pain and disappointment was too much to bear. He had torn a piece of paper from one of his notebooks and poured his heart out in a letter. With no one to give it to, Peter had placed it in a bottle he had found on the beach and had thrown it into the ocean. As he saw the waters engulf the bottle, big fat drops of tears had emerged out of his eyes. He had sat there until it had turned dark and his heart had felt lighter.

He had never forgotten Angela. He still remembered every word that he had written in that letter. What are the odds of one finding your own message in a bottle, he wondered? Peter was brought out of his reverie, by a tug on his shirt. His son wanted the bottle. No harm in letting him open it. He couldn’t read that well anyway. Peter smiled and got down on his knees. He handed the now free-of-seaweed bottle to Jamie. With a big grin on his face, the child took the bottle and immediately started rubbing it on the sides. Peter grinned as well. Oh! The innocence of youth! He waited to see what his son would do next. After a minute or two of rigorous rubbing, Jamie gave up and tugged at the cork. With a loud pop, the bottle opened. The little boy steadied himself …

When Jamie didn’t see any colourful vapours emerge, he turned the bottle upside down and tapped at the end. A folded piece of paper fell out.

It was a message in a bottle!

Peter immediately picked it up. Jamie swung his leg and kicked the sand in anger. Another discovery that wasn’t to be his!

Peter opened the perfectly crisp note with shaky hands. He took a deep breath before he read it. It wasn’t his hand-writing. And it only had one line: ‘Bottles don’t belong in the ocean.‘

Messages from the Ocean

There have been several messages that the ocean has been sending us the past few decades:
Unfortunately, all these signs have gone unnoticed. What are we waiting for?

Many a jilted lover has thrown a message in a bottle into the ocean in the hope that someone somewhere will read it.

What if one day the ocean put its own message in a bottle and sends it ashore? Will we then pay heed?

Let us not be selfish for once. Let us leave a clean planet for our children. Let us not litter our seas, oceans, rivers and other water bodies. Bottles and plastic don’t belong in our oceans and beaches.

Our trash kills. Let us be more responsible. Let us listen to the messages the ocean is sending us. Let us act upon them.