Conversations about Gender Representation in Films and the Bechdel Test 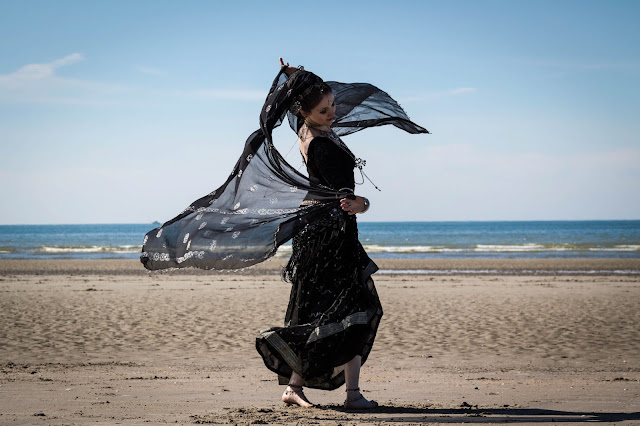 I need to start this post with an apology to the third gender. This post shall focus on how women are under-represented in Hindi Films in India. The category of people that associate neither with the male or the female genders are also largely ignored by mainstream cinema even though they represent a decent section of the population. Unfortunately when stories have tracks for the third gender or the LGBTQ community in their stories, they are usually incorporated for comic relief.  Please go through the earlier hyperlinks to read about studies that analyse the under-representation of the third gender in our films.

Now there are every few households that don’t have any women in them. Our villages, towns and cities are filled with women. And yet our films don’t seem to reflect this too well.

Cinema in India enjoys a lot of love and has a very wide audience. This gives a lot of power to the filmmakers. But do they put their power to good use? Not really.

Last year, IBM and two New Delhi-based institutions released a public study of over 4,000 Hindi films to understand the extent of gender bias in the industry.

Here is a summary of the study findings (all graphs and images are snapshots from the report that you can read here):

1) Cast mentions in the Movie Plot: Right from 1970 to 2017, the data indicates that the male character has double the number of mentions as compared to a female character.

3) Cast Introductions in a Movie Plot: Male characters are usually introduced by referencing their professions e.g. famous singer, an honest police officer, a successful scientist etc. while a woman character is invariably introduced in relation to a male character 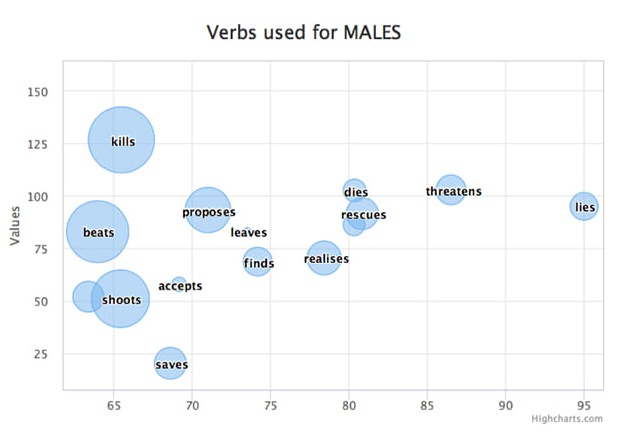 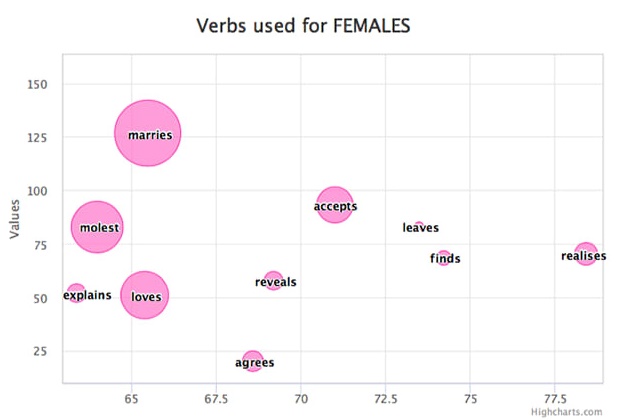 
5) Cast Dialogues and Gender Gap in Movie Scripts: On studying the ratio of male to female dialogues in 13 scripts, it was found that Raman Raghav was the least biased while Kaminey and Aligarh showed the most bias. 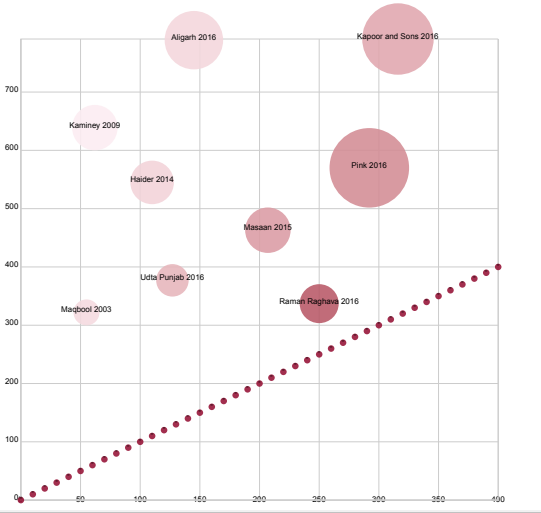 6) Movie Poster and Plot mentions: Publicizing a movie is biased towards a female on advertising material like posters, and they end up having an even smaller or inconsequential role in the movie. 50% of movie posters had female representation but 80% of the movies had more male mentions than female. Notably, 3 movies - GangaaJal 2 , Platform 3 , Raees 4 had almost 100+ male mentions in the plot but no female mentions whereas in all 3 posters females were prominently present on posters.

7) Movie Trailers: The screen time for women characters in movie trailers has consistently been half that of men for over a decade! 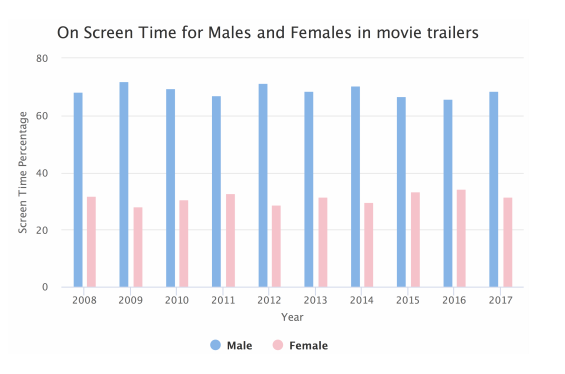 8)  Female Centricity: The good news is that the female centric movies and female mentions in our movies are on a rise. 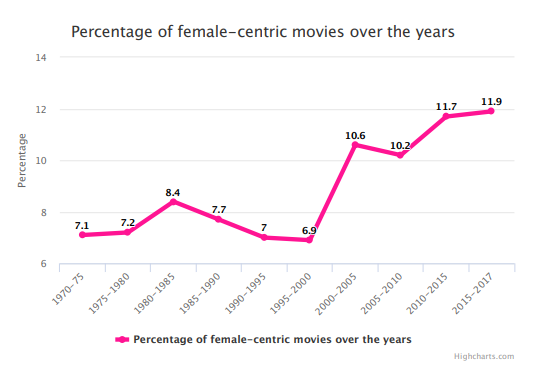 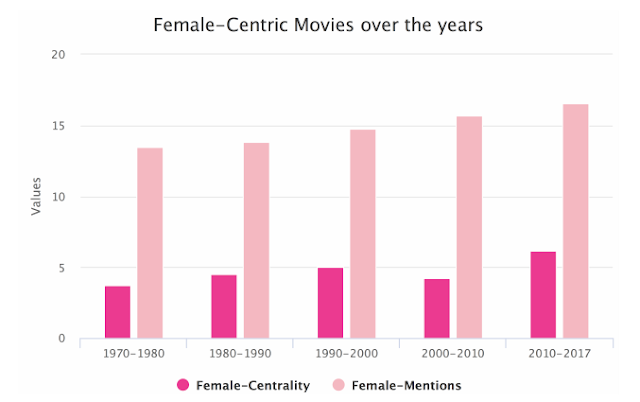 9) Singers and gender distribution in soundtracks: Since the female actors have a lesser role to play, so do their voices. Right from 2010 to 2017, the female singers have sung consistently less songs as compared to their male counterparts. The duration of the song sung by the female singer has not been considered here but it is more likely to be lopsided. This fact was also corroborated in a recent interview with the top female singers in the country. 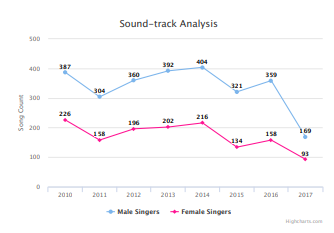 Sexism not covered by the study above


Other than the garden variety of sexism that persists worldwide,women are further objectified through ‘Item Numbers’ in our Hindi Films. The term itself is offensive. Kangana Ranaut depicts the widely prevalent sexism in a viral video in collaboration with AIB, a popular Indian comedy sketch group. You can read the on-point lyrics of this parody item number– ‘The Bollywood Diva Song’ here.

And of course we know this – the top male ‘superstars’ of our country are all 50 years old and prefer to pair with actresses half their age! Most of our 300 crore films fail the ‘Jane Test’ for this reason (read about the Test later in the post)! Fortunately the trend of female actors who vanish from the screen on getting married is changing today.

The report concludes by suggesting that the primary steps one can take to narrow the gap of gender bias in Hindi Films is by:

a)  Removing Occupation Hierarchy –Moving away from stereotypical occupations
b)  Removing Gender Bias from plots – Ask important questions like, ‘If one interchanges
all  males and females, is the plot/story still possible or plausible?’

This brings us to the second part of my post…

THE RELEVANCE OF THE BECHDEL TEST

What is the Bechdel test?

The Bechdel Test is a measure of gender inequality, particularly in films but it is also being used as a tool for Feminism in plays and short stories as well.

It was created by American cartoonist, Alison Bechdel in her 1985 comic, “Dykes to Watch Out For”. It is also known as the Bechdel-Wallace test.

To pass the test, the story has to have at least two unnamed or named female characters who talk to each other about something other than a man.

Women’s Web, a forum for women requires contributors to submit short stories that pass the Bechdel Test for its Monthly Muse contest. The measure is used widely across the globe.

But is the Bechdel Test the ideal measure of gender bias in stories? I don’t think so.

Many people across the world including the creator of the test, Alison Bechdel acknowledge that the test isn’t perfect and may not always work. It definitely highlights the problem but its simplicity can be its undoing. Let us break the test down to highlight its failings:

In a recently released short film produced by Anurag Kashyap and Shlok Sharma, the viewer takes the same emotional journey as the characters in the film take after a very traumatic event. There were no dialogues and yet the film makes you empathize with a woman’s anguish.

There are various scenarios where two women could talk about a man and yet have a feminist flavour.  One important scenario could be conversations about abuse. A woman pushing her friend/ colleague/ daughter to stand up for her rights cannot take place without mentioning the man! Such empowering conversations will fail the Bechdel test!

The film Gravity does not pass the Bechdel Test even though it revolves around a woman astronaut who survives in space owing to her intelligence and grit.  Read here on how even though most of the highest grossing films in Hollywood passed the Bechdel Test, the issue of gender bias remains largely unsolved.

If not the Bechdel Test, then what?

The Bechdel Test may still be the most popular measure but there are other tests that could be used to supplement it to get a clearer picture of gender biasedness in films.

Script-reader Ross Putman highlighted the sexism that prevails in Hollywood by sharing the character descriptions for the female lead from actual scripts in a feed on Twitter using the handle @femscriptintros. It was found that most of the descriptions only focussed on how the character looked. He replaced all the names with ‘Jane’ which is why it is called the Jane Test. According to Ross 3 questions must be asked by writers before crafting the female lead:

If your answer is ‘Yes’ to all the questions above, then the script fails the Jane Test.

2)  Samantha Ellis, a feminist playwright in Hollywood, devised the ‘Sphinx Test’ that also involved asking a series of questions for playwrights to consider while creating a female character:

These tests emerged when FiveThirtyEight (a website that focuses on opinion poll analysis, politics, economics, and sports blogging) asked 13 people in the entertainment industry to come up with personal standards for representation in cinema.

Gender Inequality behind the scenes

The study on Hindi Films doesn’t touch upon the lack of women film makers (directors, producers, editors, camerawomen etc.) in the industry. According to this article in 2016, there were only around 60 women working behind the scenes in big ticket movies. Here is a quote from a cinematographer who happens to be a woman explaining the reason–

This was in response to a comment by a reviewer who was surprised that the cinematographer was a woman. Also do read Shit People Say To Women Directors and other Women in Film.

No money for Feminism

When a movie like ‘Masaan’ is made, portraying a strong and independent girl from the small-town of Benares, I am sure it inspires women everywhere. Of course we know the love that ‘Queen’ or even the ‘Tanu weds Manu’ films have received from the audience. But I don’t think the makers set out to make ‘feminist’ films. They wrote stories that they themselves believed in. Richa Chaddha praises the makers of Masaan in a recent interview: ‘Neeraj Ghaywan and Varun Grover are possibly the most progressive (and) intelligent men I know who are so non-judgemental, understanding and humane…’ Neeraj Ghaywan followed Masaan with an amazing short film ‘Juice’ starring Shefali Shah that focussed on the sexism and patriarchy that still pervades our Indian homes. There are several other short films that aim to highlight the sexism that exists in India.

You may argue that the above films and short films are all made on relatively low budgets. Without the financial risks that a big-budget movie faces, these inspirational stories can afford to lend themselves to feminist ideals. True. But there is a glimmer of hope. I think that the reason why you saw the improving trends in female centric movies recently in the study earlier is because data suggests that half of the movie-goers are women today! This was not the case in the 80’s or 90’s where the movies catered primarily to men. As the women audience members watch more women centric films they will drive the demand upwards for such films. The consistent success of these films will make film-makers less wary of creating such films.

At the end of the day, no matter how many tests, questions and studies we subject our movies to, the fact is that writers want to share stories about the world around them. And unfortunately as long as sexism prevails in India, you can’t blame cinema or stories for mirroring the reality. Let’s try and make our women feel more as equals. Then our stories will also reflect it.